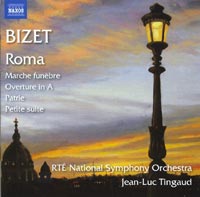 Description: A clutch of what used to be little-recorded Bizet; there are 9 other versions of the patriotic overture from 1873 Patrie! But the symphony begun while in Italy on the Prix de Rome stipend, which occupied the composer off and on for nine years and was then revised in 1871, is still fairly rare while two other pieces are only available here: the Marche funèbre of 1860-61 was the overture, creating an atmosphere of love and vengeance, to an opera written for a competition in 1867 which survives only in fragments and the Overture in A was Bizet's first orchestral work, a 12:39 piece from around 1855 which has a Rossinian overture character to it. RTÉ National Symphony Orchestra; Jean-Luc Tingaud.