Ken Russell’s View of The Planets. 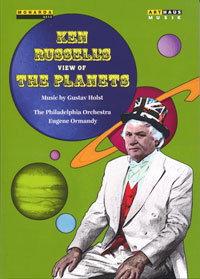 Description: Ken, the bringer of cliché! Russell completists will want this. This is one of the series of programs that the controversial and provocative British director and fanatical music-lover made for London Weekend Television in the 1980s, which hasn't been seen since. Russell 'illustrates' Holst's Planets suite with a free-associative assemblage of 'found' documentary footage. What is interesting is to see a creative and clever visual artist making a completely recognizable personal film, full of the obsessively recurring images from his better-known films - fire! naked female breasts! - out of pre-existing material. Some sequences are genuinely creative and inventive, like the montage of bizarre celebratory rituals around the world for 'Jupiter', the animated 'vanity' for the 'all things to end are made' theme of 'Saturn', the deliberately outrage-inciting juxtapositions of 'Uranus'. Elsewhere you may find yourself saying, "yeah, yeah, we get the point', and some of the imagery has lost its shock value (the Soviet Union was still terrifying in 1983; now, not so much). It doesn't tell us much about the music (but you can say the same of 'Lisztomania'!), but it's a fun glimpse into the director's mind. Philadelphia Orchestra; Eugene Ormandy. 4:3 format, PCM Stereo, NTSC all regions. 50 min.