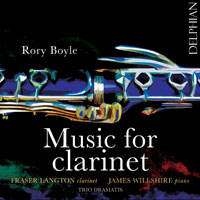 Description: A Scots pupil of Lennox Berkeley, Boyle writes music with a similar touch of Gallic elegance as his teacher, especially notable in the Sonatina, written as a gift to Berkeley. The Bagatelles are neo-romantic character pieces, written at around the same time, while Tatty's Dance, an occasional piece, is a delightful melodic miniature. Dramatis personae is a tour de force for both instruments - Boyle played both early in his career - in three movements that represent character archetypes; The brash, fast-talking Rogue; the Shadow, occult side of the psyche; the quixotic unstable Fool. In these vital and inventive pieces the composer's technical and expressive skills come into full play. The trio is an homage to Honegger, an early influence on Boyle via gramophone records. The work is an extended rhapsodic, dreamlike reflection on Honegger's 3rd Symphony, borrowing gestures and a general harmonic and rhythmic restlessness from that work. Fraser Langton (clarinet), James Willshire (piano), Rosalind Ventris (viola).