CHRISTIAN LINDBERG (b.1958): The Erratic Dreams of Mr Grönstedt for Clarinet and Orchestra, OSVALDO GOLIJOV (b.1960): The Dreams and Prayers of Issac the Blind for Klezmer Clarinet and String Quartet (Vamlingbo Quartet). 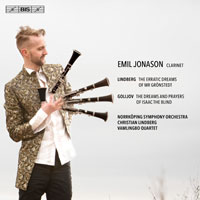 Description: The multi-talented Mr Lindberg's hugely appealing clarinet concerto was based on a series of the composer's dreams which featured the title character, who shares his name with a well-known Swedish distillery whose products, by the composer's own admission, contributed to the compositional dream process. This 'surrealistic fantasy' features six episodes of contrasting style and character, all based in tonality and featuring the soloist prominently and virtuosically. The general air of eccentricity gleefully embraced by Lindberg in this piece does not in any way imply that this is anything less than a serious concerto with a wide emotional range. A distinctly Sibelian introductory section is superseded by a delicious syncopated scherzo leavened with equal parts Keystone Kops and Klezmer, then a pastoral, romantic episode into which some jarring Alice through the Looking Glass incongruities intrude. Action and pastoral inaction then alternate, the latter with birdsong and distant thunder. There is, of course, a cadenza packed with 'I can do this on the trombone; let's see if you can do it on the clarinet' moments, which leads to a genuinely serene, reflective episode, a brief reminiscence of the opening and a final romp to the finish. Golijov's work celebrates the writings of the 12th-century Kabbalist Rabbi. The work combines Jewish prayer and folk melodies and folk dances with post-minimalist driven propulsiveness, blending prayerfulness and celebration. Much of the clarinet writing is in klezmer style, and the work's modal idiom makes its origins and intentions clear. The work is structured like a traditional three-movement concerto, with prelude and postlude, and a dramatic arc that tends toward serenity and contemplation. Emil Jonson (clarinet), Norrköping Symphony Orchestra; Christian Lindberg.