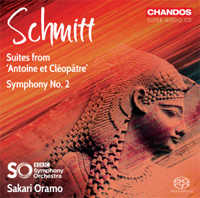 Description: The symphony, previously recorded only by Marco Polo back in 1988 and the last major work by Schmitt (1956-57), has nothing valedictory about it: as lavish and rhythmically sophisticated as his earlier music, emphatically bounding in fast passages and supple in slow, it also encompasses all the different musical expressions and styles that he had used over almost eight decades of composing. The suites from Antoine et Cleopatre, music written for Shakespeare’s play, premiered in 1920 at the Paris Opera, are better known these days on disc. BBC Symphony Orchestra; Sakari Oramo.