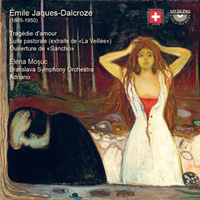 Description: The 1906 set of seven “lyric scenes”, lasting half an hour, deal with a young woman waiting for her lover to return and finds out he’s been murdered. So far, so prescient of Schoenberg’s yet-to-come Erwartung but this lady entraps and murders the murderer. Dramatic and sometimes operatic, the score flirts with atonality but doesn’t cross the line. The 23-minute suite was created in 1900 from the orchestral sections of a big oratorio called “The Vigil”. We are told nothing about it so we must read into the seemingly representational music what we can from the titles “At the Window”, “The Old Folk Dance...”, “The Forest Speaks...” and “Sprites”. Sancho (1897) was Jaques-Dalcroze’s Quixote opera and the 11-minute overture has some Richard Straussian spirit to it. French-English texts. Elena Moşuc (soprano), Bratislava Symphony Orchestra; Adriano.