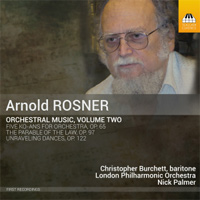 Description: Rosner forged a unique neo-romantic idiom capable of enormous expressiveness out of the harmonies and rhythms of the Renaissance, along with modes from other cultures, clothed in the full resources of the modern orchestra. These three major works display this to great effect, perhaps even more so than 06R068, outstanding though that was. It has to be said that all three deliver a great deal more substance and drama than their rather unassuming title suggest. The Ko-ans form a substantial symphonic suite; more than the thought-provoking enigmatic statements of Zen practice, these pieces go to some lengths to explore the ramifications of the ideas on which they are based; Music of Changes, for instance, is a kind of whirlwind tour of emotionally charged musical evocations, featuring what must be deliberate nods to Sibelius, Shostakovich, Nielsen and Mediæval music, while Ricercare, Ostinato, the enigmatic Music of Stillness and Isorhythmic Motet explore Rosner's musical enthusiasms, with compositional virtuosity. This is also very much true of Unraveling Dances, which was Rosner's last orchestral work. An exuberant orchestral tour de force, its punning title disguises the fact that although it explicitly alludes to Ravel's Bolero and its continuous crescendo, it is not a musical joke; the familiar bolero rhythm does indeed unravel, with the augmentation of the rhythmic 'cell' by the progressive addition of beats, 'inspired', if you will, by the composer's heart arrhythmia. The piece is lusciously orchestrated, powerful and dramatic. Parable sets perhaps the bleakest episode of Kafka's “The Trial”; the parable 'Before the Law', that finally suggests to K. that his 'case' is indeed hopeless and will only be resolved by his death. The matter-of-fact narrative, with its atmosphere of crushing futility, is illustrated by Rosner with an accompanying tone-poem that illuminates the drama in terms of austere grandeur, inviting descriptions like 'Operatic' and even 'Wagnerian'. Texts included. Christopher Burchett (baritone), London Philharmonic Orchestra; Nick Palmer.