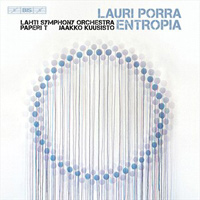 Description: Porra is a composer with an impressive orchestral vocabulary and an idiom rooted in a neo-romantic æsthetic and tonality. He is the fourth generation of a profoundly musical family, and has immersed himself in a huge range of music of all kinds, as enthusiast, student, performer and composer. Now let's swiftly dispatch the silly stuff. As a textbook example of manufactured controversy, BIS released the information that Porra is Sibelius' great-grandson, that his day job is playing electric bass guitar in a heavy metal band, and that the vocal soloist in Kohta is a 'rapper', thereby inviting howls of protest from classical purebloods (the majority of whom seemed not to have heard any of the music) about how this couldn't possibly be any good, what an insult to Sibelius' memory, etc. Rubbish. These works are accomplished concert works of integrity and communicativeness; original and inventive, and sufficiently part of tradition (several traditions, really) to be thoroughly approachable. Porra may justly be described as a bit of a musical magpie, at worst; he has a fondness for some of his great-grandfather's chords, but also for other Nordic symphonists and Germanic romantics; he has worked in film music, which shows up here and there, but there are also influences from throughout music history, including the driving energy of rock music, but also the elegant proportions of Baroque counterpoint. The Concerto, in four movements and lasting a half-hour, makes creative use of the electric guitar as a versatile solo instrument (leading one to wonder why it isn't given this opportunity more often - Tüür has done it (10Q077), but few others, and if you enjoyed that work, his 5th Symphony, then this disc will likely appeal too), beginning with familiar Spanish guitar figurations, and going on to evoke, inter alia, Ennio Morricone, The Doors and, with the introduction of greater degrees of electronic processing native to the instrument, rock-inflected electroacoustic textures that many composers have essayed with computers and synthesizers, but few with a virtuoso live electronic instrumentalist like Porra. It should also be noted that the solo instrument is also capable of lending its basso profundissimo voice to moments of calm reflection, far from the usual perception of the electric guitar in its native environment. The thrilling second movement is the funkiest scherzo in the literature, and in a lovely stroke of clever humour, the appearance of a violin solo suddenly has Porra channeling his great-grandfather's violin concerto. Kohta is a substantial tone poem in sections that accompany Paperi T (Henri Pulkkinen's) spoken verses. The music is very post-romantic and tonal, with no shortage of minimalistic rhythmic drive, and can also be heard without the vocals on a bonus track (it works either way). The piece includes many novel instrumental sonorities, including that of the Omniwerk, an instrument based on a combination of the Lautenwerk and an instrument conceived by Leonardo da Vinci, which seems to have been built into a double keyboard harpsichord case by the multi-talented Jonte Knif (see also 11T065, and if Virtaperko's pieces on that disc were your sort of thing, Porra probably is too). It sounds like a cross between an accordion and an electronic instrument, or a lute, depending on which keyboard is played. Finnish rap is less like American rap than Finnish tango resembles its Argentine cousin, so Pulkkinen's vocals are more complex, more like a rhythmic reading of poetry, than what you might have expected - in fact, if you were to read aloud certain poems by Edith Sitwell, who as long ago as 1950 was inveighing against the "rhythmical flaccidity, the verbal deadness, the dead and expected patterns" of contemporary poetry, with her fondness for internal rhymes and incisive, percussive rhythm, you would come somewhere near Paperi T's delivery. As in the concerto, there are sections of monumental Romantic grandeur, which seems to come naturally to the composer, though one climax is embellished with a clarinet having a free-jazz meltdown against the lowering orchestral backdrop, the likes of which you haven't heard before. The suite comprises three movements, with the first a piece of pulsating meditative post-minimalism which could almost be an episode from a piece by Maslanka, and the third a kind of uplifting, 'apotheosis of redemption' scene from a movie, also with a post-minimalist pulse. The middle movement is interesting; after a brief declaration of hostilities, the orchestra establishes a stately theme which a drumkit attempts to disrupt, taking a leaf out of the side-drum's copy of 'The Art of War' from Nielsen 5 - this attack is at least in part improvised too. The orchestra summons reinforcements and ultimately triumphs in a blaze of Brucknerian glory. Lauri Porra (electric bass), Joonas Riippa (drum set), Aki Rissanen (piano), Paperi T (vocals), Lahti Symphony Orchestra; Jaakko Kuusisto.