NIRMALI FENN (b.1979): The Clash of Icicles Against the Stars for Flute, Accordion and Sheng, A Highwire Act for Piano Trio, Scratches of The Wind for Alto Flute, Through a Glass Darkly for Clarinet, Trumpet and Accordion, The Ground of Being for Flute and Alto Flute, A Reaction in Force for Flute. 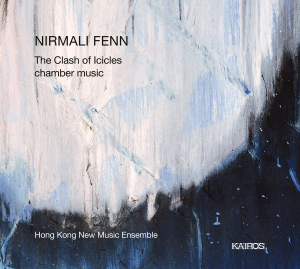 Description: Fenn was born in Sri Lanka, of both Tamil and Sinhalese descent. She was adopted by an Australian family as a child (and heard a great deal of western 'classical' music courtesy of her father’s record collection), and subsequently studied music in Australia (with Gordon Kerry and Brenton Broadstock) and later in England (with Robert Saxton); she also received guidance from Rihm and Ferneyhough. Additionally, she has lived in Hong Kong, New York, Norway, and Singapore. Her music is often associated with dance and choreographed stage action. Given these multiple influences and surroundings, it is perhaps less than surprising that her music has a strong sense of shifting perspectives, of being pulled toward different destinations and different spaces, from the wide open 'big sky' of Australia to the vertiginous canyons of cities like Manhattan or Hong Kong. Her vocabulary exhibits little or no direct quotation from musics of these varied cultures, having instead a dynamic, sculptural fluidity, in which timbre and visceral human activity - breath sounds, vocal multiphonics, pitchless instrumental noises - play an important part. The two ensemble pieces with accordion are especially satisfying, the instrument's rich, saturated chords forming a matrix in which the other players' parts are framed and embedded like textured threads of contrasting colors. Hong Kong New Music Ensemble.