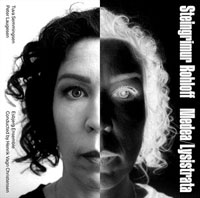 Description: Along with his librettist, the Danish poet Peter Laugesen, Rohloff explores specific aspects of and angles on two women of Greek mythology. The Medea songs deal with her psychology after being abandoned by Jason and expelled from Corinth, but do not narrate her actions. Vehement protest underlies "Fate is a rat" and furious defiance "I can light volcanoes", set by Rohloff in undulating, swooping gestures of vocal and instrumental virtuosity; there is nothing retiring or despairing about this tragic anti-heroine. "Jason's skull" is icily condemnatory, and the final song "I'll finish now" is calmly dismissive rather than despairing. The composer’s vocabulary is harmonically rich, with a constant sense of tonality but a good deal of disruptive freedom in texture and dissonance. The composer assembled this suite from his 2016 opera for this recording, extracting the overture and Lysistrata's arias to produce a character sketch similar to that of Medea in the song cycle. Laugesen's emphasis in the libretto is darker and more focused on the condemnation of male violence than Aristophanes' quasi-comedy. So even "Lysistrata's plan" in which the heroine rallies the women to "deny the warriors the reward" dwells as much on the "stupid battlecries" and "children’s screams" as on the women’s actions, and "This kind of foolishness" explicitly equates war with violent games (including a swipe at contemporary video games). In keeping with this pitch-black comedy, the music is more instantly accessible and tonal, the scene of the seductive women preening being set as a sultry nightclub song, for instance, and the overture a kind of rudely boisterous celebratory triumph. Rohloff's arrangement of a Charpentier aria leaves the vocal and bass lines intact but fills in the texture with harmonically ambiguous middle voices, to add tension. French-English and Danish-English texts. Peter Laugesen (voice), Tuva Semmingsen (mezzo), Esbjerg Ensemble; Henrik Vagn Christensen.