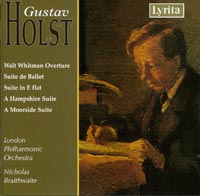 Description: The Suite de Ballet (1899) was recorded in 1980 and released on LP in 1985. The other works are apparently new to CD and were never released on LP by Lyrita, and were recorded in 1988 and 1993). Although none are exclusive to this disc, all are rare (the boisterous Whitman overture, also from 1899, is particulary appealing), particularly the orchestral versions done by Gordon Jacob of works originally composed for brass and military bands which the latter effected at various times between 1940 and 1952. London Philharmonic Orchestra; Nicholas Braithwaite.