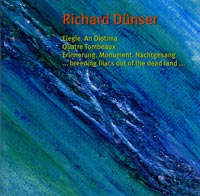 Description: Drawn to shadowy, nocturnal imagery, Dünser turned to Hölderlin as the inspiration for his first quartet, a non-vocal work that is based on the form of Hölderlin's 'Elegie'. The work is very late-romantic in its dense chromaticism and æsthetic, and perhaps surprisingly (or perhaps not, given the nature of the poetry that inspired it) lyrical. The spare Tombeaux are melancholy and restrained; so are the piano pieces, though the latter are more passionate, with the early developments of the Second Viennese School in the not too distant background (though such actual dodecaphony as is present is treated very freely). The second piece 'Monument' is especially impressive, employing Schoenberg's musical 'monogram' and with some suggestion of Messiaen and post-Messiaen French piano writing in certain harmonic gestures. The ensemble work also occupies the fertile ground between late romanticism and mid-20th century modernism; its title taken from Eliot's 'The Waste Land' and its imagery drawn from this and Rimbaud's 'Ophélie' it is again a dark, though expressive and emotionally intense composition.