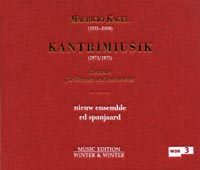 Description: Here we have Kagel turning his unique sense of musicological perspective on the phenomenon of 'pastoral' folk idioms being celebrated in bastardized mélanges of styles by well-meaning performers convinced that they are faithfully celebrating a genuine local tradition. Listening to Kagel's supremely skilful asemblage of popular melodies, high-art evocations of popular culture, kitsch (including appalling taped 'atmospheric' background sounds) and questionable performance practices, one might suspect that his view is that of an unrepentant cynic. But the whole thing is so vastly entertaining, the humor so subversively hilarious, the serious intent (such as it is) so elegantly presented (like a meticulously detailed article about a wholly fictitious subject smuggled into the pages of a scholarly encyclopædia) that you end up appreciating Kagel's 'apocryphal musical art' as a chapter of popular music history that was never written, but should have been. Nieuw Ensemble; Ed Spanjaard.