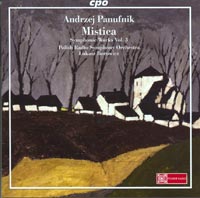 Description: While the Sinfonia Mistica exemplifies Panufnik's predilection for combining abstract forms with bleak extremesof sound and metaphysical (and, here, mathematical) thought, Autumn Music might be considered a more humanistic response to the long, suffering death of a friend in 1960; bleak and angry, the whole work comes out of the germ cells of only three intervals. The other two works are earlier and more easily approachable: the Hommage was originally written in 1949 for soprano vocalise and piano using folk material from Mazowia in central Poland and transcribed for flute and strings in 1966; the Rhapsody (1957) was Panufnik's first work written after his emigration to England and is a 17-minute mini "concerto for orchestra" in arch form with very slow outer sections and a bright, dancing folk-like center which in form and content may remind you briefly of Bartók. Lukasz Dlugosz (flute), Polish Radio Symphony Orchestra; Lukasz Borowicz.