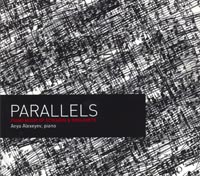 Description: This is novel: programming works by two composers with the same titles right after each other to demonstrate the influence of Scriabin on the younger Roslavets. The dates encompassed here are 1897 to 1922 and, heard in succession, demonstrate clearly how the latter built upon the former's innovation to chart his own distinct path from tonal to post-tonal music in the early 20th century. Anya Alexeyev (piano).