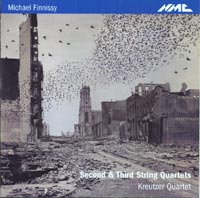 Description: The large-scale Third, a recent work (2007-09) is surprising both in conception and execution, at least for those accustomed to thinking of Finnissy in terms of the formidable new complexity piano works for which he arguably best known. It is inspired by, of all things, Bruckner symphonies, for which the composer has a long-standing affection. Of course, the music is complex and contains many passages of pungent atonality, but it keeps returning to noble, arching melodies supported by chordal pillars whose derivation is very clear even without being told, and whose vocabulary orbits around a core of late-romantic tonality (also audibly referencing early Schoenberg). Another surprising feature is the incorporation of transcribed birdsong, increasingly supplanted by actual recordings of birds - one might be forgiven for speculating about a very Romantic farewell to life, the individual subsumed into nature. The Second is less unexpected; a complex modern addition to the genre, with the parts not precisely co-ordinated, a technique Finnissy has used in some other ensemble works, adding an element of indeterminacy to the overlapping layers of material. Kreutzer Quartet.