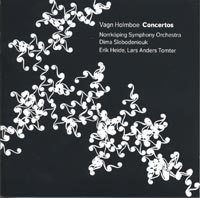 Description: Actually, the 1929 Concerto for Orchestra was never even performed until now. This is one of 80 works, several of them orchestral, which Holmboe composed before his official Op. 1. Only 13-minutes long, it's really more of a symphonic movement since there is no concertante writing and it's notable both for Nielsen influences and for being awkwardly scored - a lot of heavy percussion and brass thickening things more than a mature composer would like. The violin concerto dates from 1979, written for the Hungarian Anton Kontra which gave Holmboe free reign to allude to Balkan folk music, while the 1992 viola concerto, for Rivka Golani, uses a striking Jewish-tinged theme in its first movement and has a fiery scherzo-andante-vivace finale where folk music and dance also loom large. Erik Heide (violin), Lars Anders Tomter (viola), Norrköping Symphony Orchestra; Dima Slobodeniouk. SACD hybrid