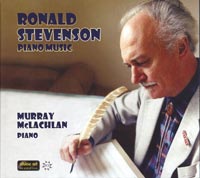 Description: This selection proceeds from the premise - Stevenson's own - that there is little real difference between the act of 'original' composition, the creativity involved in writing variations on a theme already announced, and the transcription of a previously existing work into a new one, with whatever degree of change of medium, embellishment, expansion or alteration that may involve. Greatly to be commended in view of the size of Stevenson's output and its continuing neglect is that these three well-filled CDs contain almost no duplication of previously recorded repertoire. Two full-scale sonatas, originally Ysaÿe's for solo violin, are included. A listener unfamiliar with the Ysaÿe originals would likely never guess that these works, with their organ-like sonorities or keyboard-reimagined orchestral textures, originated as violin works. To the extent that they 'sound like' transcriptions at all, one might assume that they started life as Romantic tone-poems, or organ works reimagined with Busonian or Graingeresque skill, though immediately having said that, so complete is Stevenson's absorption of the original idiom that there are passages where one's first thought is that the orchestra's concertmaster has been given an unusually virtuosic concertante treatment of the melody line. Closer to the realm of what is more commonly considered transcription is the extensive sampling of Stevenson's affectionate and ingenious arrangements of songs from diverse sources - folksong, Ivor Novello, Rachmaninov, parlor songs, opera and operetta - chosen for the all-important quality of melody, lovingly presented in keyboard terms of the utmost ingenuity yet without detracting from the singing quality of the source material through displays of superficial virtuosity for its own sake. Elsewhere, though, we find Stevenson celebrating the sheer joy of compositional mastery in his brilliant (and extremely difficult!) conflation of Rimsky-Korsakov and Chopin, or the wild technical demands of the Fledermaus caprice. The other Chopin reworkings find superbly logical combinations of different works worthy of Godowsky, yet unmistakably in Stevenson's unique voice. Works of epic dimensions (as opposed to epic vision, which can, and does, occur in the briefest miniature) are relatively rare in Stevenson's output, but one such is included here, and is very welcome; the formidable Festin d'Alkan from the 1990s, which is as much a summation of the composer's encyclopædic knowledge and experience of the piano at that stage in his life as the celebrated Passacaglia on DSCH was in the 1960s. Its three movements, teeming with every kind of pianistic device and virtuosic challenge, encompass all three of Stevenson's compositional disciplines; the first movement is an Alkanic fantasy, consisting of all original Stevenson material; the second an elaborate and extended transcription of Alkan's Barcarolle; the third, very free variations on and around Le festin d'Esope and fragments of other works. The collected Purcell transcriptions, composed over many decades, are respectful but not reverential recastings into elegant, refined pianism; the highlight is the Toccata, ample and sonorous but retaining sufficient delicacy to suggest its origins in harpsichord, rather than grand organ.