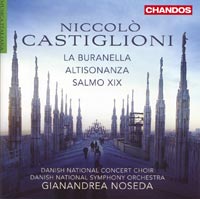 Description: We've had Altisonanza before, in June 2011 on the Neos label (06M106 - "a remarkably effective piece of nature-music, describing in vivid, graphic detail the composer's beloved mountain landscapes among which he spent his last years. The combination of a sophisticated, modern idiom and the almost naïve simplicity of this descriptive music presents an intriguing paradox; simple, sustained cords and folk melodies, gentle and tonal; imitations of birdsong; representations of cold streams and mountain air by association with specific textures and high registers are presented in a context of sustained dissonance, atonality and freedom from compositional conventions"). The 15-minute psalm setting of 1979-80 is in the same style but the 1990 La Buranella is completely different: a 25-minute suite of orchestrations of keyboard sonatas by Galuppi (who was called Il Buranello after his birthplace) which is utterly neo-classical in nature and which, blindfolded, you might think is a newly discovered piece of early Italian musical tribute by Respighi! Italian-English texts. Teresia Bokor, Sine Bundgaard (sopranos), Danish National Concert Choir, Danish National Symphony Orchestra; Gianandrea Noseda.