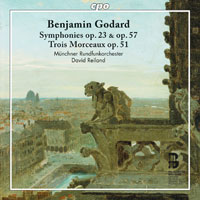 Description: Godard was a rhapsodist and melodist and didn’t much like being bound by sonata form. In fact, only three of the eleven works titled “symphony” in his works-list use it and two of those are lost, leaving the one in B flat recorded here from 1879 and it won him great praise from contemporary reviewers. Still plenty of melodic invention, though, in its four movements and 29-minute length. The Gothique of 1873, however, is like the other “symphonies” - narrative or evocative pieces in five movements wh’ich are really orchestral suites (like the Symphonie orientale which came out on Dutton Epoch back in 2011 - 09N001). Nothing Gothic about this though: the title just means generically “old”; this is in the “Suite in Old Style” genre. The Morceaux (1879-80) are more evocation: a funeral march, a Brésilienne (brief and exotic) and a Kermesse (a village fair). Munich Radio Orchestra; David Reiland.