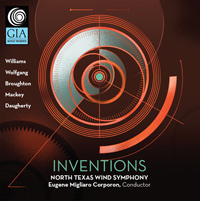 Description: Another appealing entry in the increasingly huge library of varied, colorful and thoroughly enjoyable repertoire for that uniquely American institution, the virtuoso wind orchestra. Williams contributes a thrilling curtain-opener, and Mackey a rousing circus march. More serious are the vividly pictorial and atmospheric essays by Broughton, a kind of score for an imaginary film about the Native Americans of the plains, and Daugherty, evoking bleak, lonely winter landscapes by Grant Wood (of 'American Gothic' fame). Gernot Wolfgang's three-movement suite is 'concertised' big-band jazz, with something of 'West Side Story' about it. Mackey's 'Symphony', Wine Dark Sea, receiving its second recording here, is based on episodes from the Odyssey. The work is in an appealing, big-band jazz-inflected style with propulsive beats and more than a little of the film score about it, less portentous and serious than the idea of a symphony after a classical myth might suggest. The first movement, 'Hubris' is all action; the slow movement, the heart of the work, sticks to one mood, beauty and heartbreak. For the finale, the narrative skips to the scene in the land of the dead. After a ghostly scene-setting introduction the rest of the movement is propulsive action music, very cinematic and culminating in a rousing, triumphal conclusion. North Texas Wind Symphony; Eugene Migliaro Corporon.