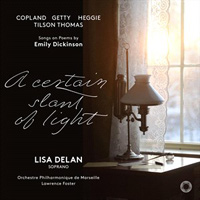 Description: Emily Dickinson's unique brand of Romanticism is inherently musical; if music takes up where language leaves off, she inhabits the ground between the two as much as any poet (and before she took to poetry she apparently had considerable musical gift). So it is no surprise that setting her verses attracts composers, and naturally suits the Romantic tendencies of composers thus disposed, as here. Heggie's idiom is lyrical and melodic by nature, and his songs are tender, emotional and expressive of the sense of naïveté and depth of feeling of the poems. Getty has set Dickinson extensively before, in his large 1981 cycle The White Election. This more recent set explores the odd, questing, haunting imagery of the poems in an idiom less redolent of the 19th century than the earlier work (though still thoroughly tonal), with some touches of orchestration as unconventional as the poet herself. Both Heggie and Getty produced their orchestrated versions of their songs for this recording, following in Copland's footsteps - the version heard here was a subset of his original set of 12 with piano accompaniment. Tilson Thomas takes a somewhat different viewpoint, pointing up aspects of the poet's individuality, or indeed eccentricity, of social expression. The music bears distinct similarities to that of the composer's friend and colleague, Bernstein, as well as echoes of their mutually beloved Mahler, in a cycle with a distinct dramatic shape. Texts included. Lisa Delan (soprano), Orchestre Philharmonique de Marseilles; Lawrence Foster.