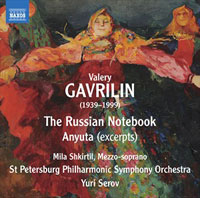 Description: Gavrilin was one of the most colorful and significant Russian composers of the second half of the 20th century. He was only 25 when he composed ‘The Russian Notebook,’ a 35-minute ‘poem of love and death’ crafted in a new musical language that doesn’t employ folk melodies but does use folkloric texts, and with a virtuosic vocal part. These stylized tunes are combined with rich melodies to form a haunting cycle heard here in a 2018 orchestration. The ten numbers from the ballet Anyuta (1982) are lively, melodious and touchingly beautiful. Russian-English texts. Mila Shkirtil (mezzo). St. Petersburg Philharmonic Symphony Orchestra; Yuri Serov.