MAGNUS LINDBERG (b.1958): Accused for Soprano and Orchestra, 2 Episodes for Orchestra. 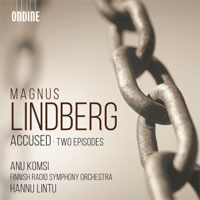 Description: Lindberg's mastery of large, impressive orchestral forms is familiar by now, and here are two more examples, both typical, and unique in their own ways. Accused is Lindberg's first work featuring a solo voice, in three movements that set extracts from, first, the interrogation of a victim of the turbulent events surrounding the French Revolution (Mademoiselle Théroigne de Méricourt), then the transcript of the Stasi interrogation of a man accused of spreading propaganda by reading Der Spiegel in East Germany during the 1960s and finally (and more controversially, perhaps) the transcript of the trial of Bradley/Chelsea Manning, convicted in the USA of espionage linked to the release of classified documents to WikiLeaks. Lindberg plausibly claims to be making no political point, being interested in exploring the conflict between a targeted individual and a powerful state agency. The composer likens this approach to "the setup of an opera", and indeed the personal nature of the drama has a great deal in common with the struggles of many operatic characters - against fate, misfortune, enemies, what have you - with the solo voice giving both the interrogators' questions, prompting and statements that the accused is challenged to deny, and the terrified, sometimes defiant, responses of the individual, all against the massiveness of the orchestral mechanism of the state that could overwhelm the entire proceedings at any moment (there are some finely judged moments of orchestral bombast that suggest a flexing of bureaucratic muscle in preparation to do just that). The Two Episodes were commissioned as a kind of orchestral hors d'oeuvre to Beethoven’s 9th as the main course. Restricted to a Beethoven orchestra (thus without the extravagant doublings and percussion to which he is accustomed), Lindberg nonetheless provides a very Beethovenian heft and momentum, a sense of being drawn inexorably into the orbit of the 9th, without ever trying to sound like or quote from Beethoven. The falling fifths motif from the opening of the first movement is a recurring gesture, but incorporated into a Lindberg soundscape; the language, in both works here, is Lindberg's consistent but evolving 'meta-tonal' idiom in which harmonic progressions have the inevitability and directionality of tonal key relationships. Texts and translations included. Anu Komsi (soprano), Finnish Radio Symphony Orchestra; Hannu Lintu.