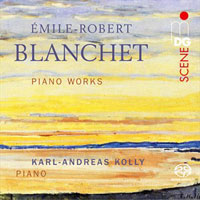 Description: After studying in Weimar and Berlin (including with Busoni), Blanchet returned to Lausanne, where he taught at the conservatoire and also took over its direction for a time. At the age of 40, however, he turned his back on teaching to devote himself almost exclusively to his passion, mountaineering. Fortunately, he continued to play occasional recitals, for which he repeatedly composed his own pieces. Blanchet is obviously not interested in virtuoso effect. Again and again, there are harsh dissonances in the full-bodied chords that create an intense, sometimes downright threatening atmosphere, as in Tocsin (Alarm Bell), which - unlike many nationalistically euphoric contemporaries - seems to foreshadow the horrors of the First World War as early as August 1914. Whether in his numerous etudes, ballads or nocturnes Blanchet's idiosyncratic harmonies unfold their multi-layered charms. Karl-Andreas Holly (1901 Steinway piano).