MARK BARDEN (b.1980): Veil for 2 Piccolo Flutes, aMass for Amplified Nonet, personæ for Bass Flute and Bass Clarinet, lamentoso for Piccolo Flute and Bassoon, cleft for Violin and Cello, Etudes 1-3 for Piano, anatomy for Percussion and Large Orchestra. 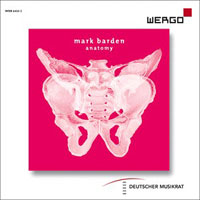 Description: Barden is concerned primarily with the anatomy of sound, fittingly enough given the title of his largest-scale work to date. Using techniques extended far beyond conventional playing, and incorporating noise textures, his works direct the listener's attention to sonic processes in a way that is taken for granted in conventional music. All but three of the pieces here are duos for unorthodox combinations of instruments, and the composer explores the shadowy realm in which totally different instruments can achieve identity, or identical instruments exercise their diversity of timbre - as in Cleft, for cello in scordatura tuning with the full compass of a double bass, and violin, which examines the instruments through the dual meaning of the word "cleave". The pairs of instruments in these duos intertwine very closely, generating beats between adjacent tones or sounding identical when merely "breathing" - breath sounds, either literal or instrumental, are common to most of these works. The triple trio - strings, percussion, piano and electric guitar, noises produced on music stands - aMass puts these effects to use on a larger scale; initially it is impossible to tell which combination of instruments is producing the breathy, inarticulate sounds. Gradually the sources of sound assert their independence, while paradoxically blending into the crowd and crescendoing to a climax of impressive cacophony. Two of the piano studies are high velocity toccatas, the uniformity of timbre offset by the wayward interaction between voices and gestures; the third is a fascinating deconstruction of the sinfonia from Bach’s C minor keyboard partita, with notes omitted, radical octave displacements, and harmonic compression of adjacent lines that leads to extreme dissonance while preserving the contour of the original fugue. In Anatomy, the percussionist weaves in and out of blocks of somewhat Lachenmannic orchestral textures, independent from them yet seemingly constrained by their immovable mass. Various performers, Ensemble Mosaik, DSO Berlin; Peter Rundel.