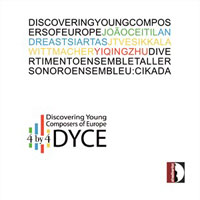 Description: These works were commissioned from the final award-winners in a kind of tournament bracket for an Europe-wide composing competition. For this purpose, Europe was divided into four regions - roughly; chilly north, warm south, Germany, Italy and the Balkans, and former Eastern Bloc - and about 150 submitted scores were whittled down to three from each region. A final stage of judging selected a winner from each, who then wrote this very diverse group of works. All four composers have something of a preoccupation with instrumental sound production (maybe this reflects the predilections of the judges?) Ceitil’s SarabaNde is formed of tonal material that sounds like a Baroque sarabande, but the composer calls for Baroque performance techniques, and applies octave displacements to the hypnotically repeated, post-minimalist melodic line, which becomes increasingly blurred and indistinct as the piece progresses. Vesikkala Wittmacher's piece is a rich compendium of extended techniques, multiphonics and instrumental "preparation" to suggest electronic sounds. Ìérkos denotes an autumn ritual in Tsiartas' native Cyprus, and the dense filigree of the instrumental textures evokes mystery and an agglomeration of organic textures. Zhu's Partita consists of five tiny "concertinos" each with a different solo instrument. The pointillist textures suggest Baroque ornaments and flourishes, separated from their conventional context.