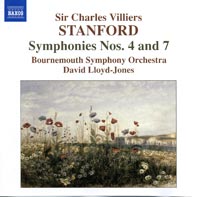 Description: Hard to believe it's been 20 years since Chandos started their Stanford cycle of symphonies, Irish Rhapsodies and other miscellaneous orchestral works. Now, a budget-price Stanford symphony cycle. Who'd have thought it? No. 4 of 1888, a big-scale, four-movement work of 43 minutes, originally had a program (Youth, Strife, Death, Eternal Life) which Stanford later removed while No. 7 (1912) is its opposite: a three-movement, classically proportioned work of less than half an hour which was a polemical response to the gigantic symphonies then thronging the repertoire. Both, however, stay firmly within the Mendelssohn, Brahms, Schumann stylistic orbit. Bournemouth Symphony Orchestra; David Lloyd-Jones.