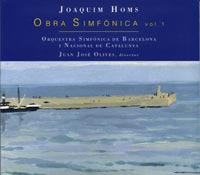 Description: Three of the works on this disc are from the third period of Homs' compositional career, when having embraced dodecaphony and adapted it to his needs, the death of his wife acted as a watershed in his professional as well as personal life, introducing a darker, more personally expressive element. The seven-movement Presències is in fact an in memoriam work for his wife, and alternates music of dark-hued, homogeneous texture and elegiac mood, in very slow tempi, with more rhapsodic movements, nonetheless restless and tinged with melancholy. The later "Soliloquies" are more spare, exploiting sparse, skeletal textures and limited material, thus making their serial modernity more apparent; the composer here was additionally memorializing his teacher Roberto Gerhard, who had recently died. The variations belong to the composer's early, eclectic period, with elements of Romanticism, impressionism and borderline atonality somewhat uneasily coexisting in music that is nonetheless satisfyingly ingenious and involving. The late Biofonia - one of his last works - contains elements of his earlier styles and builds considerable tension, though in a freer, less anguished vocabulary than the works of a decade or two earlier. Orquestra Simfònica de Barcelona i Nacional de Catalunya; Juan José Olives.