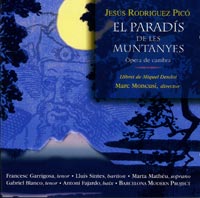 Description: This chamber opera is based on texts by Alfred Jarry, who laid the foundations of the theatre of the absurd. Accordingly, the 'story' makes no real sense; various characters from history or popular mythology are placed in situations in which they react irrationally, though according to their stereotypes, and sometimes violently, to each other. The style is not so far removed from the Stravinsky of Oedipus Rex or the Soldier's Tale, with suggestions of Weill here and there. The vocal writing is in an exaggeratedly dramatic interpretation of conventional operatic styles, as befits the absurd and grotesque behavior and situations of the characters, without straying into avant garde techniques or extended vocal methods. Catalan libretto. Francesc Garrigosa, Gabriel Blanco (tenors), Lluís Sintes (baritone), Marta Mathéu (soprano), Antoni Fajardo (bass), Barcelona Modern Project; Marc Moncusí.