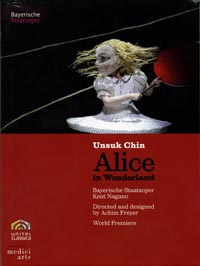 Description: Chin emphasizes the surreal and dreamlike aspects of the story; apparently the composer experiences vivid dreams, and this work is an attempt to explore the relationship of dreams to heightened, or alternative modes of consciousness, freed from the limitations of the waking state. In keeping with this all-inclusive interpretation, the music is a deliberately eclectic mélange of styles. Much of the main action of the opera is set to music that is freely tonal, somewhat reminiscent of Prokofiev, with some Stravinskyan bitonality and harmonic pungency, although the composer freely veers into far more modern territory, not so far removed from Ligeti (with whom she studied, and who introduced her to the 'Alice' books); here and there classical pastiche metamorphoses into Ligetian sonority with the inevitable illogic of dreams. Sometimes the music goes even further, into sound effects accompanying stage action, meaning that an audio-only recording of this piece would not be a satisfactory way to encounter it. The libretto, by the composer with David Henry Hwang, extrapolates from the children's story, playing up the existential and identity issues in the original, and underlining the nightmarish aspects of the dream world. Characters are puppet-stylized, with oversized costume heads, or actual puppets. The video is more a film interpretation of the work than a literal film of the stage production, with multiple, moving camera angles, some focusing effects and split screens, and much cutting betwen different viewpoints. Subtitles are provided in 4 languages, and are a necessity in at least one scene, when dialogue is projected onto the stage but not sung, as the film's emphasis on close-ups obscures much of this. 5.1 surround or stereo: 16:9 aspect ratio. Sung in English. Sally Matthews (soprano), Dietrich Henschel (bass-baritone), Guy de Mey (tenor), Chorus and Children's Chorus of the Bavarian State Opera, Bavarian State Orchestra; Kent Nagano. 16:9 anamorphic wide-screen; PCM Stereo or DD 5.1 or DTS 5.1; NTSC all regions; 123 min.