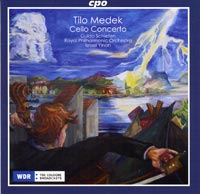 Description: Medek undertook some early studies in Darmstadt, but had renounced every trace of the avant-gardism that stood for long before he wrote this big (40+ minute) traditionally laid out four-movement cello concerto in an idiom of 20th-century tonal romanticism. Some elements of social commentary and protest can be felt in the satirical street-song of the scherzo or the brooding melancholy of the slow movement; the composer was after all a product of East Germany and lived through that part of Europe's most turbulent half-century. The first movement, and any number of gestures especially in the solo part elsewhere, strongly recalls Shostakovich; the slow opening section of the last movement harks back even further, to Mahler. The whole adds up to a strong, big-boned and eloquent, very personal statement. The solo cello pieces are slightly earlier; the 'tombeau' for Zimmermann is an agitated soliloquy, speaking of struggle and great effort (and requiring great virtuosity with an absence of showmanship from the soloist); the five brief 'Shadow Plays' are contrasting character pieces, exploiting timbres and tonalities for maximum theatrical effect in a purely musical medium. Guido Schiefen (cello), Royal Philharmonic Orchestra; Israel Yinon.