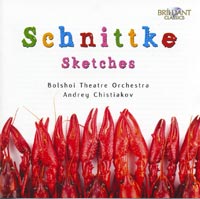 Description: In 1978 Alfred Schnittke (1934-98) wrote the incidental music for a production of The Inspector's Tale, an adaptation for stage of Gogol's Dead Souls. A suite was assembled from the score by Gennadi Rozhdenstvensky, and two leading colleagues of Schnittke - Gubaidulina and Denisov contributed a jointly composed march, which opens this CD. In 1985 the music was choreographed as a ballet, Esquisses. Schnittke composed a number of new pieces for this production. The characters in the action are all from Gogol, but in addition to the Dead Souls, we meet several characters from Notes of a Madman. A passage from the book is recited in this piece, and is read by the conductor on this CD. The music is a poly-stylistic, with a huge orchestra (2 electric guitars, flexatone, prepared piano with coins inserted between the strings), quotations from Beethoven, Haydn, Tchaikovsky - all with a sense of devilish mischief which suites ideally the grotesque nature of many of Gogol's characters. Bolshoi Theatre Orchestra;  Andrei Chistiakov. Original 1996 release on unknown label.