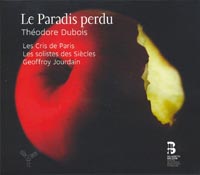 Description: This oratorio, begun in 1871, won a prize in Paris in 1878 in a period when the authorities were looking to both "re-Christianize" the masses in the wake of the Franco-Prussian War and the Paris Commune and to banish German influences from French music. The text is based on Milton and is in four sections: "The Revolt", "Hell", "Paradise - The Temptation" and "Judgement". Dubois proves a worthy successor to Gounod in this work, strong in dramatic structure and with outstanding choral effects. Even more interesting is the very opening instrumental prelude which, like Haydn and Rébel in centuries gone by, portrays the chaos before creation in dissonant manner. The orchestral score was never published and disappeared; for this recording an orchestration for string quintet, wind quintet and piano (all period instruments - note the the players are members of Les Siècles, who have recently provided us with period instrument recordings of Saint-Saëns Third Symphony and Stravinsky's Firebird) was made by Olivier Schmitt (b.1980). 2 CDs. French-English texts. Chantal Santon (soprano), Mathias Vidal (tenor), Alain Buet (baritone), Los solistes des Siècles, Les Cris des Paris; Geoffroy Jourdain.