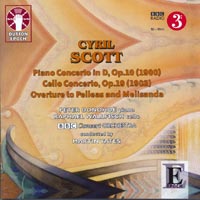 Description: World Premiere Recordings of these three early works. Both Pelleas and the piano concerto are from 1900 and the cello concerto from 1902. All three have been edited/completed/realised by the conductor here and cellist Wallfisch edited the solo part of his concerto. As you might expect, this is too early for anything recognizably "Scottian", whatever that may mean given how protean his stylistic variance could be. You'll hear a touch of Sibelius in parts of the 17-minute Pelleas - really a tone-poem regardless of its formal title - and a hint of Impressionism in the first movement of the piano concerto but these are works of the prevailing late Romanticism of the very turn of the century, wielded with a sure hand by the young composer and with plenty of elan and virtuosity especially in the solo part of the piano concerto. Peter Donohoe (piano), Raphael Wallfisch (cello), BBC Concert Orchestra; Martin Yates.