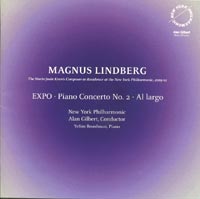 Description: EXPO, an exhilarating curtain-raiser of a piece, was written for the NYPO, to celebrate the composer's and conductor's first season with the orchestra. Much of it has a restless, toccata-like character, and even the slow sections have a nervous, pent-up energy. The individual approach to tonality that Lindberg has adopted in his recent works, with its unpredictable but structurally meaningful harmonic progressions is very much in evidence here. The concerto is a big, muscular work, very approachable, in three linked movements, with distant but distinct echoes of Ravel's essays in the genre. The expository first movement is full of the bold gestures and virtuosic figuration of the Romantic concerto, and this is even more true of the second movement with its alternating blocks of piano and orchestral texture, full of mystery, grandeur and drama. The energetic finale channels both Ravel and Prokofiev, and includes a large virtuoso showpiece of a cadenza. Al largo has connotations of a seascape, large in scale and depth. It progresses from the looming fanfares of the opening through passages of hyperactive energy, lush calm and majestic, elemental strength, to an exquisite ending in nightfall, all in Lindberg's characteristically sumptuous orchestral textures. Yefim Bronfman (piano), New York Philharmonic; Alan Gilbert.