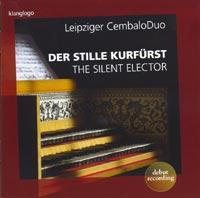 Description: This unusual collection stems from the archives belonging to Elector and later King Friedrich August III of Saxony. He loved to play keyboard duos in private with Peter August, his kapellmeister (and, after his death, with his successor Joseph Schuster); the first two items here were written by them for him while the rest were arranged from orchestral and chamber music. Even better, instead of two harpsichords, using a fortepiano for one of the parts lets us hear the art of the transcripion better. Hildegard Saretz (harpsichord), Michaela Hasselt (fortepiano).