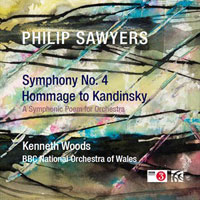 Description: Sawyers' Fourth Symphony develops further the assured symphonic technique already evident in its predecessors (see 10T007), and consolidates his position as a major symphonist of our time, working in a traditional framework and a highly chromatic but always tonal language. This powerful and dramatic work is in three movements, drawing on the (unintended) model of Bruckner's 9th, with a final Adagio acting as slow movement and finale. Whereas the doubt, if not despair, that haunt Bruckner's final movement prevented a triumphant conclusion, Sawyers is able to provide a blazing, positive ending to his symphony. The affinity with Bruckner is not surprising; Sawyers' symphonic thinking sounds very much like a development of the European tradition, far more than that of England in the 20th century, and his acknowledged and audible models are Mahler, Brahms, and Haydn, not Elgar or Vaughan Williams. The first movement is a large and dramatic sonata-allegro, tense and stormy from the start, which having presented its material proceeds through an extended and very varied development which travels freely between keys and moods. Finally, a climactic passage with pulsating trumpets and timpani wrenches the movement back into a recapitulation of the original material and a tragic, unresolved coda. The following scherzo is a fast, quicksilver movement, given to unpredictable outbursts of passion, even anger. A melancholy slow section serves as a kind of trio, followed by a return of the fast material, this time leading to an aggressive conclusion. The large finale begins as a profound, tragic funeral march, the intensely moving heart of the work, now revealing that all the furious energy of the preceding movements was merely prologue. The music continues in sombre but lyrical vein until the funeral march blasts back onto the scene, heralding a long, surging move toward major key tonalities and the hard-won resolution of a blazing coda. The half-hour tone poem was inspired by a large exhibition of Kandinsky's paintings in London in 2006. The synæsthetic painter, who blurred the lines between music and the visual arts and gave a number of his works musical titles, lends himself ideally to transcription into music by a master of intricate, dynamic structures and bold colours as Sawyers. While not attempting a programmatic‘description' of individual paintings, Sawyers captures the boldness and vividness of Kandinsky's style, from the præternaturally heightened colours of the early representational works to the astonishingly bold, dramatic constructions of the later abstract ones. Accordingly, Sawyers employs his very large Romantic orchestra to depict bold shapes in highly contrasted blocks of color, linked in structures with a sense of energetic motion, as in Kandinsky’s teeming canvases. The work’s turbulence and energy might seem surprising for an evocation of feelings aroused by abstract modern art, but this points to Sawyers' appreciation of Kandinsky’s unique qualities - no retiring pastel watercolorist this! - and the elevation to heroic, epic stature of the subjects of Richard Strauss' tone poems is frequently called to mind. BBC National Orchestra of Wales; Kenneth Woods.