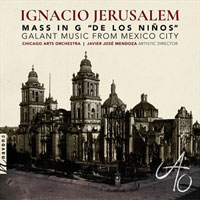 Description: Considered the most influential composer of galant music in the Americas, Jerusalem might not be as well-known as his European counterparts: but the reason for his limited renown has more to do with a geographical disadvantage, rather than lack of musical ability. The works presented on this album were largely composed towards the end of the emigré’s life, in the 1760s, and they bear all of the hallmarks one would expect from a European-born composer of the era. There is plenty of zest, liveliness, spirit, drive; but also a distinctly Italian take on Catholic piety, spiritual reflection and faith. Chicago Arts Chorale, Chicago Arts Orchestra; Javier José Mendoza.