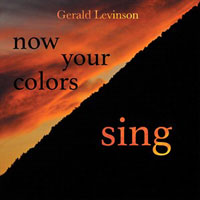 Description: Messiaen, with whom Levinson studied and whose assistant and translator he was for a while, is an inescapable presence in much of the music here, which is also strongly inflected by the modes and colours encountered during his extensive visits to Bali, Thailand, Sri Lanka and other countries in the region. Now Your Colors Sing is dedicated to Messiaen, in memory of Yvonne Loriod, and the piece makes use of Messiaen's modal Golden Oriole motif, but its strange harmonies and timbres in the spatially divided double string orchestra have more in common with George Crumb, with whom Levinson also studied. The large orchestral works, especially the composer’s First Symphony, Anāhata, are especially impressive. The sinuously melismatic melodies in Anāhata are clearly related to the modes of Indian rāgas, and the timbres of metallic tuned percussion (are those of temple bells, while the imposing harmonic masses that form the timeless vast spaces in which the music resonates (the Sanskrit title suggests something universally present but unperceivable through the senses) have a powerful sense of directionality that is western, and recognisably 'symphonic'. The work falls into sections analogous to symphonic movements too, which contributes to the sense of a dramatic arc, enabling western ears to navigate its Eastern timelessness. Avatar dates from two decades later, and is similarly scored for large orchestra used to its greatest coloristic effect; the influence of the monumental blocks of sound in the Turangalila Symphony is strongly felt in this powerful work. The monumental organ work composed for the 850th anniversary of the cathedral of Notre Dame contains inevitable similarities in harmony and texture to Messiaen, but also passages that are quite different, suggesting spectralist timbres and mediæval melodies. A fascinating and compelling composer portrait of a highly original and unusual, but approachable, figure in American music. 2 CDs.