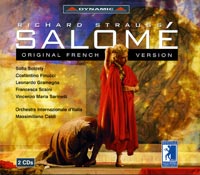 Description: Oscar Wilde's play, on which the German translation used by Strauss for his libretto was based, was originally in French (the German libretto was also later "officially" translated into French). Strauss did his own French version, using Wilde's text with help from Romain Rolland. It was finished three months before the opera was premiered in December of 1905 but not recorded until Kent Nagano did it on Virgin Classics almost 20 years ago (long out of print). He reduced much of the opulent and heavy orchestration and made some striking changes in the vocal lines. Apparently, he used Debussy's Pelleas et Melisande as his model for what he wanted his French Salomé to emulate. Collectors who don't have the other recording will probably want to have this one. 2 CDs. French-English libretto. Sofia Soloviy (soprano), Constantino Finucci (baritone), Leonardo Gramegna (tenor), Francesca Scaini (mezzo), Orchestra Internazionale d'Italia; Massimiliano Caldi.