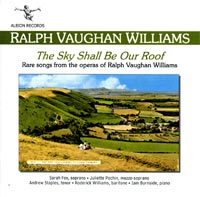 Description: "Rare Songs from the Operas" is the title of this voice and piano recording and, of course, these operas are rare - only one modern recording each for Hugh the Drover and The Pilgrim's Progress available right now and two of Sir John. Hugh, finished before the First World War although not performed until 1924, represents Vaughan Williams in the full flush of his career-changing discovery of English folk-song while Pilgrim, composed at various times between the dates of 1925 and 1951 is predominantly meditative and spiritual but of often rapturous quality. Texts included. Sarah Fox (soprano), Juliette Pochin (mezzo), Andrew Staples (tenor), Roderick Williams (baritone), Iain Burnside (piano).