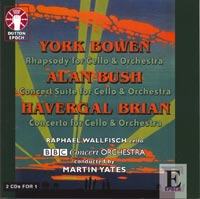 Description: Lovers of the gritty, craggy, dense late style of Brian will be shocked by the calm, sunny, almost neo-baroque lyricism of this three-movement concerto (lasting a frighteningly long 22 minutes!) dating from 1964. If late Brian isn't for you, this will be and it's the perfect disc-mate for Bowen's 24-minute Rhapsody (c.1924), gloriously and richly romantic with hints of the world of Bax in its slow section, and Bush's 1952 Concert Suite. The latter was commissioned for the 500th anniversary of the city of Nottingham and takes its inspiration in its first three movements from the English viol consorts and madrigals of the 17th century while its final two conclude in a more Romantically lyrical vein. 2 CDs for the price of 1. Raphael Wallfisch (cello), BBC Concert Orchestra; Martin Yates.