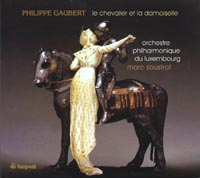 Description: Premiered in June 1941, three days before his sudden death, this Lifar ballet was Gaubert's greatest public success. Lasting 73 minutes, it's in the late 19th-early 20th century French ballet tradition from Lalo's Namouna to Schmitt's Oriane et le Prince d'amour. It's medieval setting is suggested by elements of modal music (more Renaissance than truly medieval but musical scholarship wasn't yet where it is today) especially in some evocative second act dances while the violin (the Prince) and the flute (the Damsel) as well as the clarinet, get many minutes of attractive spotlighting. A feast for French balletomanes. Luxembourg Philharmonic Orchestra; Marc Soustrot.