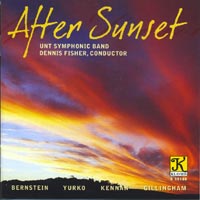 Description: After Sunset is an elegy for the composer's mother. In introverted, chamber-like textures, the music mourns with nobility and restraint in a tonal idiom and predominantly dark hues, punctuated by chiming and tolling bells. Kennan's sonata was originally a work for trumpet and piano, revised and scored for winds 40 years later. A decisive first movement precedes a lyrical slow movement with brief dramatic episodes, and a sprightly finale. Gillingham's Genesis symphony is based on episodes from the first book of the Bible. An impressive work in five movements, its sumptuous Technicolor orchestration, hymnlike chorales and passages of ostinato-driven propulsiveness have somewhat in common with Maslanka's bold symphonic canvases. Solemn quotations from several actual hymn tunes, as well as the Dies irae, heighten the mood of liturgical authenticity, while Divine Wrath (this is the Old Testament, after all) evokes music of drama and spectacle. UNT Symphonic Band; Dennis Fisher.