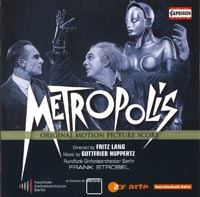 Description: This is the sort of project which really cries out for the detailed, well-written and documented notes of the good old Marco Polo film score series. There is information here and quite a bit of it but the English is not great and you'll ask a lot of questions about how a 153-minute film (22 minutes of previously thought lost footage was found in Argentina in 2008, prompting this new reconstruction of the score) to which the music was fitted more closely than a glove, could have a soundtrack of only 77 minutes. But the music is what it's all about and there are 32 tracks here, in the three sections of the film - Auftakt, Zwischenspiel and Furioso - written in late Romantic style with elements of machine music for, obviously, the machines and with other helpings of waltz and jazz as the scenario dictated. Huppertz also scored Fritz Lang's other epic Die Nebelungen (1924) and seven other films before leaving the industry and writing 38 other opus numbers of orchestral and chamber music and Lieder. Wonder what's there? Radio Symphony Orchestra Berlin; Frank Strobel.