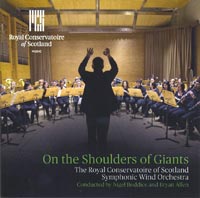 Description: The Graham is a celebration of the traditions of brass playing in the U.S., from the noted orchestral brass sections to jazz to band music. Various 'giants' are very literally referenced to provide the work's musical substance, beginning with Bruckner, continuing with Miles Davis and Tommy Dorsey, and ending with the Souza and big band traditions. Lindberg's piece is a stunning piece of compositional virtuosity that celebrates the kind of music the composer likes, which seems to cover a rather wide territory. Impressive music that is also terrific fun, made all the more so by the pretentious program note provided and then debunked by the composer, the point being that good music doesn't need to hide behind that kind of pseudo-intellectual posturing. Forman uses four distinctive types of California weather as metaphors for psychological and emotional states. The music is highly rhythmic, and inventively so, with emphasis placed on ingenious percussion textures and sonorous timbre, in an extended largely tonal idiom. Dalby's piece is very tonal; intended as a kind of response to Boulez' Le marteau sans maître, the work is direct and forceful, 'plain' but not lacking depth, and with a cunning sense of parody and sophisticated humor. The Boyle is a protest against the proliferation of wind turbines in the Scottish landscape, with much (surprisingly tonal!) mechanistic grinding and grating, contrasting with gentle, distant lamenting music depicting the suffering landscape. Royal Conservatoire of Scotland Wind Orchestra; Nigel Boddice, Bryan Allen.