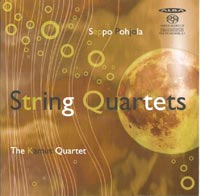 Description: The string quartet has a tendency to be a very personal idiom in which to compose, allowing an element of autobiography in musical terms. So it is with Pohjola, for whom the pronounced stylistic division between the first two quartets and their successors marks a transition, even a crisis, in the composer's development. The first quartet is brief, very modernist, and quite unlike the eclectic, audience-friendly later works of the composer that we have been accustomed to from previous offerings. A few years later, the second quartet largely avoids the Lachenmannic sounds and textures of the first, and admits more traditional harmonic and rhythmic elements to appear over a longer timescale. The Third is quite different; much more tonal and consonant, with a minimalistic drive sometimes underpinned by a jazzy, pizzicato bass line; a humorous lightness of touch, absent in the earlier pieces, is also very evident. The much more extended Fourth is the most varied and sophisticated of the four; much of the work is a chain of canonic devices of various kinds, leading to a sense of linear progression and a wide variety of textures, both contrapuntal and harmonic. Less lightweight than its predecessor and more accessible than the first two, this quartet offers the cogent musical dialectic of a fully mature compositional idiom. Kamus Quartet. SACD hybrid.