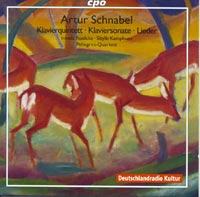 Description: The huge, three-movement, 54-minute piano quintet, long thought lost, was mailed anonymously in 2001 to a Schnabel exhibition in Berlin and, while it was written in 1915-16 and premiered in Berlin at the beginning of January of 1918, it was only performed again five years ago. It was condemned in a 1952 article by Krenek as "reactionary" because it was not completely atonal and, thus, seemingly did not follow on from the promise of the slightly earlier Notturno (offered along with the First String Quartet by these artists last February - 02N054). It's an intense, expresssionist work, its first two movements flirting with atonality (nothing beyond Berg from the same period) and the last with astringent dance-music references to lighten the overall mood. The tough, 29-minute sonata of 1923 - post-Busonian, in the sense of Otto Luening perhaps - without bar lines, meters or key signatures but with each movement characterized by painstakingly precise movement headings, flirts with either tonality or with atonality, depending on your point of view (previously recorded by Chandos and offered here in April 1999 but now out-of-print) 2 CDs. German-English texts. The song cycles (35 minutes out of the set's 153) are early (1899-1903), as are the Klavierstücke (1906) and Fantasiestücke (1898) and are attractive examples of late Germanic Romanticism (with a hint of Brahms and Richard Strauss here and there). Pellegrini Quartet, Irmela Roelcke (piano), Sibylle Kamphues (mezzo).