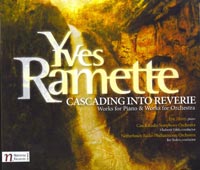 Description: More first-rate, defiantly unfashionable music from this unusual and unjustly neglected figure. The composer's penchant for rapidly alternating time signatures points to the twentieth century, while his harmonic language would not perturb a composer of the second half of the nineteenth; the remarkable feature of Ramette's style, and the one that makes him such a rewarding find, is that the result is an idiom that remains reassuringly familiar and as approachable as any of his romantic forebears, and yet manages not to sound like anybody else, overall. Formally, Ramette's symphonies are unconventional, with a tendency toward cyclic forms and tripartite structures, though the traditional elements of symphonic writing - exposition, thematic and key opposition, development, recapitulation, the characteristic movements - are always present as an underlying navigational reference. The Third is a single span, beginning and ending in tragic mood, a more harmonically ambiguous cousin to the last movement of the Pathetique, interrupted by an intense, highly chromatic episode of rhythmic propulsion, which is about as modern as Ramette's symphonic writing ever gets. The Fifth, dedicated to Honegger's memory, is in three movements which chart a dramatic arc from struggle to transcendence, in the composer's chromatic language with its frequent rewarding tonal resolutions, a recognisable trademark of his style. Intriguingly, the piano works display a different aspect of the composer's personality, decidedly 20th-century in approach; here he sounds like the student of Honegger that he was, suggesting that his reluctance to embrace a less conservative harmonic idiom in his symphonic writing was not because he couldn't, but because he didn't want to. .Impressionistic textures abound in an harmonic realm significantly removed from conventional tonality, frequently suggesting an idiom derived from Debussy or late Scriabin, but taken a few steps further. 2 CDs. Original 2002 MMC releases (01D090 and 11E062).